Birmingham one of worst councils for recycling

Our Labour run council has been moved into the relegation zone for recycling. Birmingham is now in the bottom 10 councils for their worst recycling rates in England.

Figures for 2016/17 show that only 24.4% of household waste is recycled, reused or composted. This compares to 42% in Solihull, 41% in Sandwell and 37% in Dudley. Nationally the rate was 43.7% - with the top performing council scoring 65.4%.
Liberal Democrat campaigner Colin Green said “This is a disgrace, Labour are letting down Birmingham and making us a laughing stock nationally. At the January Council meeting, Labour rejected Liberal Democrat calls for a trial of food waste collection, showing again how little they care about the environment.” 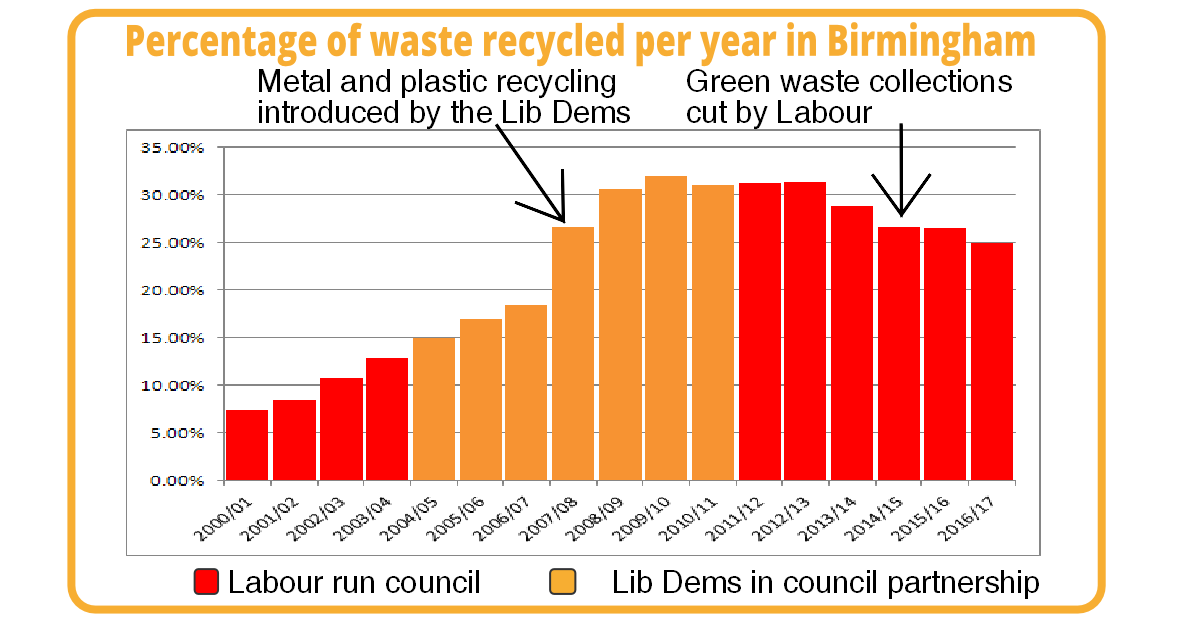 Nationally, the Lib Dems introduced the 5p plastic bag charge, since then plastic bag usage is down by 83% - that’s 9 billion plastic bags.

Colin added “The Liberal Democrats have been campaigning, since 2016, for a charge on disposable cups. Every day more than 7m coffee cups are thrown away, we can’t carry on like this. We also need to ban all plastics that cannot be recycled. Only the Liberal Democrats are standing up for the environment and making Birmingham a cleaner, greener place to live.”

To reverse the decline, the Lib Dems want to do three things:

Our plan is fully costed.  Over the 4 years of the next council, we will spend a fraction of the money being put into savings this year.  One thing is clear, the Labour run council don't want to spend money on recycling.  They'd rather keep it in the bank instead.